Newest Member of the Houston Museum of Natural Science…… 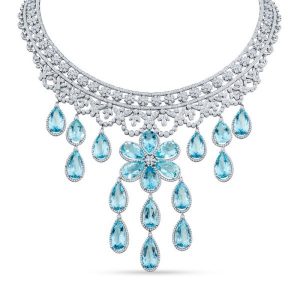 We can beryl-y believe this beauty!

Please forgive our pun, we are ecstatic to share the latest addition to the Lester & Sue Smith Gem Vault: this brilliant aquamarine necklace designed especially for the Houston Museum of Natural Science by Valobra Master Jewelers right here in Houston.

Blue-hued beryl- known to us as aquamarine- gets its color from the inclusion of iron in the stone, which creates the beautiful blue to blue-green shades typical to the stone. These unique shades are what inspired its name, “color of the sea,” in Latin.

Hailing from the Kashmir region bordering northern India, the necklace’s 20 pear-shaped aquamarines are cut from a single raw gemstone and collectively weigh 81.32ct.

From the moment master jeweler Franco Valobra laid eyes on the gem, he envisioned a necklace inspired by the architecture, fashion, and people of Kashmir. Set in white gold, the white diamonds form traditional motifs found in Indian design, allowing the brilliant aquamarines to be the focal point of the necklace. From initial conversations to its current display, the necklace took 4 months to complete between three people: the CAD designer, Wilfredo the in-store master jeweler, and Franco Valobra himself. 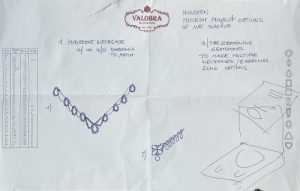 Franco Valobra is a fourth-generation master jeweler. His great grandfather, Vittorio Valobra, opened the Valobra Jewelry Atelier in Piazza San Carlo, in Torino, Italy in 1905. Vittorio later earned the title of Official Jeweler to the Italian royal family – the House of Savoy – the longest reigning family of Europe at the time. Now, over a century later, Hollywood royalty model Valobra masterpieces on the red carpet, in fashion magazines, and for their own personal collections. 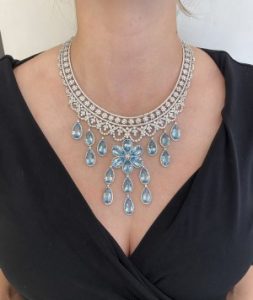 You may recognize the name Valobra from around town. Franco expanded the House of Valobra to Houston in 2006 and has been giving back to our community ever since.